A Blueprint for Your Brand’s Next April Fools’ Day Prank

Marketing & Communications, Strategy
And just like that, we’ve made it to the other side of another April Fools’ Day. It’s time to survey the brand landscape to see which brands succeeded, and which…

To describe Taylor in a sentence: She loves to learn. She brings this sincere curiosity and excitement to her work with clients. Taylor’s seven years of experience span the breadth of marketing, communications,…

And just like that, we’ve made it to the other side of another April Fools’ Day. It’s time to survey the brand landscape to see which brands succeeded, and which ones will be cleaning up a mess of their own making for weeks to come.

April Fools’ pranks are often high-risk, low-reward endeavors. So, why do brands keep on prankin’?

To be honest, that’s mostly true. But that doesn’t mean there are no successful April Fools’ pranks. It just means that comedy is an art form that takes practice, and most marketers only get their reps in once a year. Me? I took two improv classes two years ago, so just call me a comedienne.

When it comes down to it, a prank is nothing more than a joke. Jokes have structure. Even if you’ve never felt the heat of a spotlight on stage or held a microphone in front of a brick wall, understanding how a joke works can help make your brand’s April Fools’ prank actually funny.

There are four main components to a joke: the premise, the setup, the punchline, and the tag. I’ll go through each one and show some examples of each component from comedy and advertising.

The Premise: Bringing Your Audience on Board

The premise is where you set the scene for your audience. The best way to do this is to rely on the relatable. This means choosing a universal experience—or at least one that is relatable to your specific audience—as the setting of the joke. It helps your audience catch up to you, so to speak, so you can keep moving toward the punchline.

Some examples from jokes:

Both examples provide familiar formats that most people readily understand.

An example from the 2021 April Fools’ Day crop comes from Poopourri’s Doo Desk.

This premise is based on an instantly relatable experience for many of Poopourri’s customers. Pre-pandemic, I would have never taken a work meeting while clearly laying on my bed. One year in, these boundaries have been destroyed like the interior walls of a fixer-upper on demo day. It’s dark if you think about it, but at this stage of quarantine, dark humor works.

I’ve also been inundated with ads for ergonomic work-from-home furniture—probably related to how often I search “yoga lower back pain” on YouTube. This reminds me of one of those ads.

The Setup: Getting Specific

Once you’ve established your premise, move on to the setup. The setup is essentially adding more specificity to your premise.

The goal of the setup is not to make people laugh, but to build the stakes. You have to get your audience invested in your story if your punchline is going to pay off.

For a joke example of this, I’ll point to one of my favorite jokes, Cameron Esposito’s Guacamole. I highly recommend watching, but in case you don’t, here’s a summary:

Cameron establishes the premise by speaking directly to her audience. Her stand up show takes place in Oregon in 2014, and she sets a somber tone by bringing up an ongoing court case challenging the state’s equal marriage law. She says she believes that the courts will uphold equal marriage because diversity makes us stronger. Here’s how she knows that: she was once on a party planning committee…

From the premise, she moves on to the setup. She says that one day, she looked around at the committee and decided that their next party should have Whack-a-Mole.

You read that right, Whack-a-Mole. Cameron masterfully piques the audience’s attention by saying something we didn’t expect her to say. Now, the audience has enough information to be invested in what happens next.

If you want the punchline, you have to watch the video. I promise it’s worth it.

With any good joke, the premise and the setup get the audience on your side and lay the groundwork for the punchline. For a brand to successfully pull off an April Fools’ prank, they need to be thinking about these things, too—and not just on March 31st.

The setup for brands happens all year round. Every interaction a customer has with your brand is a chance to build up their expectations of who you are and what you do. The flip side is also true, if you aren’t doing so hot in the brand equity department, maybe reconsider that April Fools’ joke.

Such is the case for Volkswagen U.S. For their 2021 prank, they “accidentally” shared a press release saying they are changing their name to Voltswagen. The goal of this prank was to promote their new electric vehicle. It’s not a bad goal, but they failed to recognize the importance of the setup. The dust was just starting to settle from the Volkswagen emission scandal, and all this joke did was stir it up again.

We know, 66 is an unusual age to change your name, but we’ve always been young at heart. Introducing Voltswagen. Similar to Volkswagen, but with a renewed focus on electric driving. Starting with our all-new, all-electric SUV the ID.4 – available today. #Voltswagen #ID4 pic.twitter.com/pKQKlZDCQ7

While an April Fools’ day joke may seem like a great way to build brand affinity, there is a minimum threshold you need to have already to successfully set up your joke.

The Punchline: Making a Joke Pay Off

Only after you’ve set up the joke can you get to the punchline. This is what makes a good April Fools’ prank so hard to do well. Not every joke bombs, but many require a lot of effort then fail to make a splash. That’s because the premise and setup are required to create expectations, and a funny punchline subverts those expectations.

The best punchlines build up then subvert our expectations quickly. They catch us off guard. They make us think, then make us laugh. This is what my favorite 2021 April Fools’ Day prank did.

This five-word tweet has all the makings of a good joke. The premise is the tweet format. We’re all familiar with tweets from people sharing their every random thought. Twitter, in particular, is a breeding ground for hot takes like this one.

Paddington—the bear, the myth, the legend—has a fully realized brand that serves as the setup for this joke. He’s cute. People love him. He LOVES marmalade.

This joke stops scrollers in their tracks. It makes them think, “Paddington would never!” Then they realize it’s a prank, and voilà, a joke!

The proof of this joke’s brilliance is in the pudding—or the marmalade. Engagement with this tweet shattered the engagement of a typical Paddington tweet. You can see the staggering number of likes, retweets, and comments on the post above. These numbers keep climbing, which is great for building hype for Paddington 3.

I would be remiss if I didn’t also cover the golden rule of punchlines: Don’t punch down. It’s never funny to make a group with less power than you be the butt of a joke—even if your intentions are good. Burger King UK’s International Women’s Day tweet is a recent example.  I’ll let my colleague, Jackie Stare, give you the details of that debacle.

The tag is basically a bonus joke built off the joke you’ve already made. You’ve hit the big punchline, and you use the goodwill you’ve established and the story you’ve told to keep the good times rolling. Tags are not required, but they can turn a good joke into a great joke.

My favorite comedic example of this is Saturday Night Live’s Totino’s Super Bowl Activity Pack. This sketch employs a classic premise of any number of snack food commercials from the early aughts to set up Vanessa Bayer’s character: a pleasant wife who loves to feed her hungry guys but gets bored during The Big Game. The punchline comes when she reveals the Totino’s activity pack. The tags are all the mini jokes that happen throughout the sketch after the punchline. She gets to spin a top! She draws a bee! She sticks one of those sticky hands to the fridge! The joke is extended further by Totino’s Part II and Part III, both of which I also highly recommend.

Likewise, brands who commit time and resources to their April Fools’ Day pranks should be prepared to commit fully. In the social media era, this often means responding to reactions (should you be lucky enough to get them).

Bud Light did a good job with this for their 2021 prank: Bud Light Pizza Seltzer.

I wouldn’t say the joke itself is all that great. Its strengths are that it taps into the ubiquity of seltzer in the zeitgeist. It also has a gross factor—yuck, anchovy beer!— that some people find funny.

In my opinion, the best part of this joke are the replies, or in our joke terms, the tags. 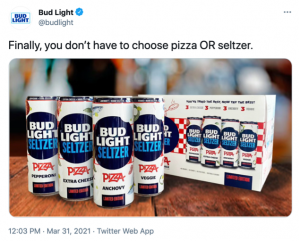 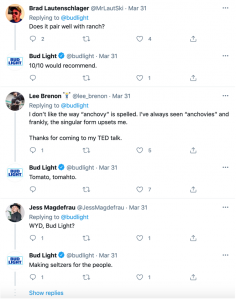 Bud Light’s team was ready to make actually funny replies that extend the life of the joke. Most commenters probably didn’t expect the brand to interact with them, so this alone subverts expectations in a way that heightens the joke.

Building Your Brand’s Next Prank

To summarize what makes a good joke, you need:

Use this blueprint to make your brand’s 2022 April Fools’ Day prank—or to write a good joke!

Not sure about next year’s prank, and want some help? Just reach out!

And that’s my time. Y’all have been great. Thank you!